S: Hey Kathy. Did you watch the launch of Wentian lab module on Sunday? What a magnificent spectacle, also an exiting moment for all Chinese people.

K: Of course. China launched the second of three modules to its permanent space station over last weekend, in one of the final missions needed to complete the orbiting outpost by year's end.

A live feed on state broadcaster CCTV showed the 23-ton Wentian module launching on the back of China's most powerful rocket, the Long March 5B, at 2:22 p.m. from the Wenchang Space Launch Center in China’s southernmost island province Hainan.

As I was watching the rocket blasting off to space on television, amateur photographers and space enthusiasts watched onsite as it lifted off to join the Tiangong space station, or Heavenly Palace in Chinese.

S: Wentian, or "Quest for the Heavens", is the first lab component of Tiangong space station, which will function both as a backup of the core module and as a powerful scientific experiment platform.

The Wentian module has already set multiple new world records. With a length of 17.9 meters, Wentian is the world's longest single-body manned spacecraft. The 23-ton Wentian lab module is heavier than any other single-module spacecraft currently in space, including those with the International Space Station (ISS), according to the mission contractor, the state-owned space giant China Aerospace Science and Technology Corp (CASC). 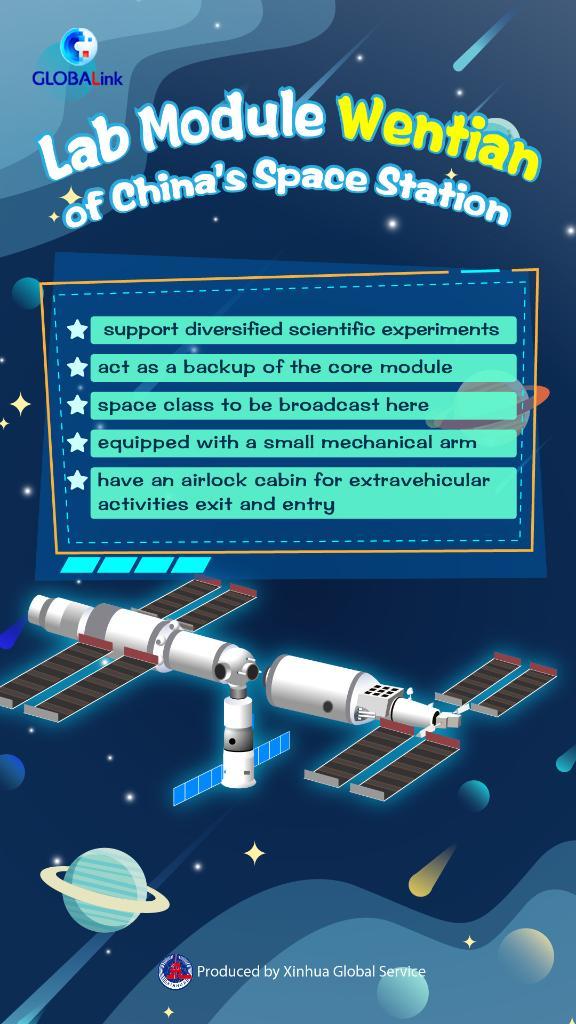 K: The main task of Wentian module is to uniformly manage and control the space station assembly, and provide special airlock cabins and emergency shelters to support astronauts to stay in orbit and ensure their safety. In addition, it also has the function of conducting scientific and technical experiments inside and outside the sealed cabin.

For the internal design, the typical feature of Wentian is that it integrates the platform function and the test load function. The main equipment in the cabin is arranged in the work cabin, loaded with eight experimental cabinets, as well as the equipment required for the flight.

Besides, Wentian provides one more exit, one more kitchen, one sanitary area, one emergency shelter, as well as three sleeping zones for the astronauts, thus greatly extending the living and working space for them.

S: China began constructing the space station in April 2021 with the launch of the Tianhe module, the main living quarters, in the first of 11 crewed and uncrewed missions in the undertaking.

As a member of the "China Space Station" family, Wentian and other family members play different roles. The basic configuration of the Chinese space station is the Tianhe core module, Wentian module and Mengtian module, which means “Dreaming of the Heavens”.

The Tianhe core module launched on April 29, 2021, is the most important part of the space station, and other modules will be installed on its interface, which is also the main living space of astronauts. The key platform functions of Wentian and Tianhe are the same, which can fully cover the working requirements of the space station assembly.

Wentian is designed mainly for the study of space life sciences, which can support the growth, development, genetics and aging of multiple species of plants, animals and microorganisms under space conditions. More than 10 research directions have been planned and more than 40 scientific projects have been established for the Wentian.

Mengtian, which is expected to be launched in October and, like Wentian, is to dock with Tianhe, forming a T-shaped structure and mainly used for microgravity research. 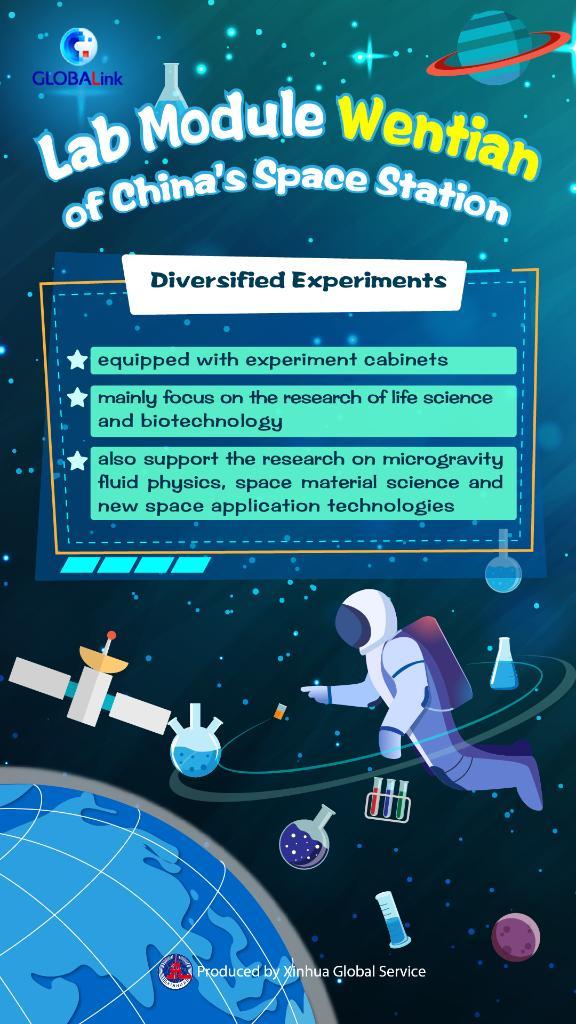 S: Good question. In fact, when astronauts enter the module for the first time, they need to start the harmful gas purification function in advance and ensure that all channel pressures are balanced.

After entering the module, the astronauts have to carry out busy sorting work, including material handling, living environment layout, preparation work for scientific experiments and extravehicular activities, etc. Speaking of work, what do you know about the astronauts' mission this time?

K: Well, after the astronauts successfully enter the module, they will mainly carry out a series of research, mainly including four fields: space life science and biotechnology, microgravity fluid physics, space material science, and space application of new technology experiments.

S: Wow, that should keep the astronauts very busy for a while. By the way, the working environment of the astronauts in Wentian has also been comprehensively upgraded.

The upgrades include sound absorption, noise reduction and shock absorption. The module is also equipped with a special airlock for astronauts, so they can get in and out more easily and operate more conveniently.

Like the Tianhe core module, Wentian is also equipped with a mechanical arm, which not only reduces the working intensity and risk of astronauts but also flexibly and efficiently supports the extravehicular load test.

K: To meet the high energy requirements for the large number of scientific experiments in space, Wentian is equipped with a pair of the largest flexible solar panels that the country has ever developed.

It also carried four big tools with a weight of more than 100 kilograms, which are called control moment gyros. The combined use of 12 control moment gyros can effectively reduce the use of fuel, and achieve the effect of energy saving. China is the third country in the world that can apply this technology.

S: The success of Wentian's extraordinary launch is of great significance to China's aerospace industry because this is the first lab module of China's space station.

Besides, the launch has to be a zero-window launch, because Wentian needs to rendezvous and dock with the space station Tianhe core module. Otherwise, it will not be able to reach the specified position, and it will cost a lot of money to adjust the orbit; even leading to its termination.

The successful docking indicates that China is one step closer to the goal of fully completing the on-orbit construction of the space station.

K: There was a time when China had little chance to do such research. Now China can.

A browse at the past 10 years will find a clear path for China's space industry. In 2003 China became the third country to launch an astronaut into orbit on its own accord, after the former Soviet Union and the US.

The Shenzhou series of spaceships has progressed from IX to XIV, while the space station is finally coming into service. Besides, there is also the Zhurong martian probe, Xihe solar exploration satellite, as well as the Chang'e lunar probe. The Chinese are adding more footprints in space, for the common good.

S: 2022 is the decisive year for the construction of China's space station and also the 30th anniversary of the establishment and implementation of China's manned space project. The latest information released by the National Space Administration shows that more than 60 launch missions are planned this year.

The China Space Station is planned to become fully operational before the end of 2022, aiming to accomplish the in-orbit assembly of the country's most ambitious program in less than one year and a half since the launch of the Tianhe core module in April 2021. After the decommissioning of the international space station in 2024, the Chinese space station will become the only space station in space.

Before China, only the former Soviet Union and the US were capable of assembling ultra-large spacecraft in orbit. In the coming months, people on Earth will be able to witness the construction of the China Space Station, which will be completed at a speed that has no precedent in mankind's history.

And that’s it for today, see you next time.